Following a brief period of operation in 1918, and the formation of the Canadian Air Force there in November 1918, the current RAF Upper Heyford was opened as a bomber station in November 1927.

As part of the Wessex Bombing Area, Upper Heyford was designed to house three squadrons of the RAF strategic bombing force capable of reaching targets in France (then Britain's most likely enemy in a future war).

Handley Page Hyderabad and Hinaidi biplanes were replaced by Hawker Harts and Hinds, and the trials of the Handley Page H.P. 38 resulted in a production order as the ‘Heyford’ bomber.

When Hitler came to power in 1933 and began to rearm Germany the role of Upper Heyford changed. Potential targets in Germany were beyond the range of RAF bombers in Oxfordshire. New squadrons formed at Upper Heyford, or trained to use new aircraft types, soon left for bases in East Anglia and Lincolnshire which were closer to Germany.

The Vickers Wellesleys of the RAF’s Long Range Development Unit trained at Upper Heyford in 1938.

On the outbreak of war in 1939 Bristol Blenheims left for France to join the British Expeditionary Force’s Air Component for long range reconnaissance work over the French-German border.

Upper Heyford became a training station for Bomber Command and provided aircraft for leaflet dropping and the first 1,000 Bomber Raids.

As a result of the Cold War in 1950 the United States Air Force (USAF) took over Upper Heyford and began to upgrade it to be capable of operating nuclear-capable Boeing B-29 Superfortresses.

USAF Strategic Air Command Bombardment Wings of bombers deployed to Upper Heyford for 90 days at a time until January 1959, with aircraft kept on alert. From 1959 until 1965 Boeing B-47 jet bombers were deployed on ‘Reflex Alert’ for 30-day periods, ready to take off in 15 minutes in response to Soviet aggression.

McDonnell RF-101C Voodoos and McDonnell-Douglas RF-4C Phantoms of the 66th Tactical Reconnaissance Wing was based at Upper Heyford from 1966 to 1970.

The 20th Tactical Fighter Wing arrived in 1970, exchanging its North American F-100D Super Sabres for General Dynamics F-111E Aardvarks in 1971. The F-111 could fly low-level strike and attack missions in all weather conditions, day or night, at supersonic speeds. The three squadrons of the 20 TFW were joined by the 42nd Electronic Combat Squadron in 1984. The 42nd ECS operated the EF-111A Raven or ‘Sparkvark’ to ‘jam’ hostile radar systems. In 1986 42nd ECS aircraft took part in the bombing raid on Tripoli, Libya.

Upper Heyford aircraft were deployed to Turkey and Saudi Arabia from 1990 to 1992 in support of Gulf War operations against Iraq.

The end of the Cold War in 1989 and US Defence Reviews led to the decision to withdraw the USAF from RAF Upper Heyford and close the airbase. In 1993 the ageing F-111s were retired, and the three 20th Fighter Wing Squadrons were re-activated in the USA.

The Ministry of Defence disposed of RAF Upper Heyford after the USAF left in 1994. The site is now owned and under development by the Dorchester Group. It has been surveyed and recorded by English Heritage. The flying field has been designated as a conservation area and a number of the buildings are now scheduled monuments. 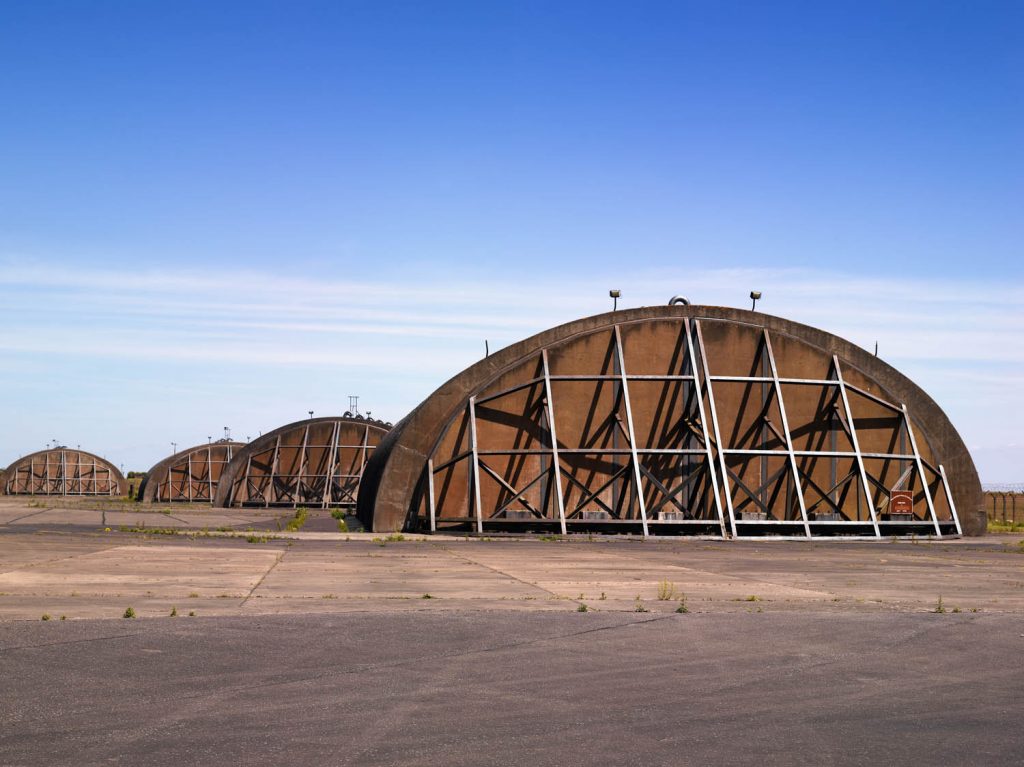